Dinner in open air with the wind blowing heavily in our faces, for the first time in Tibet I was really a little cold that night. Pilgrims came nearby asking for some food, it was hard to resist to give something, but since they were numerous, we could easily give away all of our food, and we had three days of hiking ahead of us… Tibetans usually do the Kailash kora, a hike of 53 kilometres around the Holy Mountain of Kailash, in one long day.  Some do it all the way prostrating, which must take them weeks to complete the kora.  High above on the rocks where we were sitting, there was a sky burial site, and we could see the vultures flying above it.  Somebody was just buried there a couple of days ago, and we were advised not to go up there – I think this was only appropriate, we should not interfere and show our respect by staying away. In the evening, some of my travel companions played their Tibetan horn they had bought in Lhasa,  in the freezing cold.  It was great fun but did not last long, as the temperature was nicer inside the tent, and we had to rest early today.  One of our drivers slept in the open air that night, another one had left to walk the kora (he would come back early tomorrow morning). 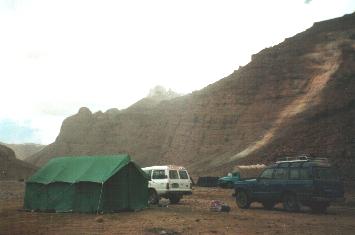 The next morning, the sky was bright and there was fresh snow on the mountains.  After a short breakfast and after having packed, the porters showed up and discussed who had to carry what.  We started our first day of hiking, towards the first monastery near the North face of Kailash, the place we would sleep that night.  It took me about six hours to get there.  The path was almost all the way flat, with only a few ups and downs, but hiking above 4500 metres really took a lot of effort ! The whole day I walked in a valley with steep walls of rock besides me and a river, sometimes covered with a thick ice sheet.  When the wind was blowing above it, it was surely freezing.  But the sun was shining, and we could have a picknick in the sun and relax for a while.  About halfway the canyon, we reached the West face of Kailash. There is a prostration point there and several chörtens.  Somebody asked me to take his picture, and I had mine taken there too (just couldn’t resist).  The final two hours were kind of hard since the altitude was getting to us.  When we saw the monastery on the rocks on the other side of the river, we knew we were not far anymore, and behind the corner, we saw the splendors of the North face, shining in the sun ! We had regained energy by this amazing sight, and we went just a little bit quicker, crossing a little glacier river, and reached the guesthouse of the monastery, which turned out to be very basic with dirt floors and no toilets nor water, but what a sight in front of our door !  I spent some time resting and admiring the Kailash mountain.  After that, I went up to the chörten, passing the grazing yaks, and had a view on some snow field at the end of the glacier.  I didn’t go all the way up to the glacier, since it became misty and I was tired.  By the time I was at the guesthouse again, it was snowing already.  Kailash was now completely gone in the mist. We went to bed soon afterwards. 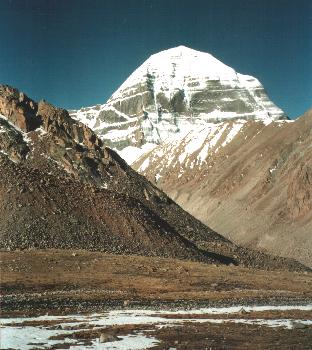