“Saga Dawa is an important Tibetan Buddhist festival, held each year on the full moon day of the fourth lunar month of the Tibetan calendar, to celebrate Sakyamuni ‘s enlightenment.” , that’s what every guidebook will tell you.  But actually having been there, to me at that moment it was more like being part of a magic event, something that gets a total grip on all of your senses.  So what’s going on ?  Each year, they replace the Tarboche flagpole, a huge pole that stands on the Kailash kora, south of the mountain.  People from all over Tibet gather here that day to attach their prayer flags they brought from home, to pray, and to help erect the flagpole.  The flagpole should stand perfectly upright, or else things are not good for Tibet.  The whole ceremony is led by a Lama from the nearby monastery.  It’s his job to make it work ‘right first time’. 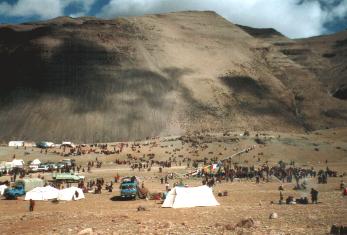 I was lucky to arrive just about one hour before the actual flagpole ceremony began.  Hours before the actual rising of the flagpole, people circumbate the flagpole that is down on the ground now.  They pray and throw ‘windhorses’ (little pieces of coloured paper with buddhist scriptures on them) into the air.  They help to remove last years prayer flags and attach new ones.  As a visitor you are almost forced to follow them as they go around and around, time after time.  Along the sides, on the slope of the nearby hills, a lot of people are sitting to watch the ‘spectacle’ and there are musicians which play all the time on their horns and symbals.

The flagpole is first erected half-way, using A-structures and ropes.  The Lama continually gives instructions on how to do it, when to stop and when to go on.  Everyone can help pulling the ropes, that’s the ‘non-organised’ part of it, but there are always plenty of people doing this spontaneously.  When they cannot go further using the A-structures, they pause for about half an hour.  The Lama sits on the side, and all the time people come to sit in front of them, to talk to him, to give him some gift (mostly some drink !), to ask him for good fortune.  They do not ‘queue’ however, as soon as someone is gone, someone else comes out of the walking crowds – it all seems not organised, but in fact it’s a very special way of organisation !

Then comes the final part, the last step that has to result in the perfect upright position of the flagpole.  A steel cable is attached to two trucks, engines are warmed up, and then, on the sign of the Lama, they go backward, pulling the flagpole.  To be able to control the movement, on both sides of the flagpole people pull ropes too, to prevent it doesn’t incline to one or the other direction.  Once the trucks start moving, it all goes very fast, the flagpole is moving, the A-structures that were supporting it, fall down, and only seconds later it is all over.  And then big magic occurs, the flagpole stands upright, and at that very moment, thousands of windhorses fly into the sky… like an explosion of prayers going to the heavens.  You can really feel a sudden great sense of happiness surounding you. Like in meditation, reaching a pure sense of happiness happened here. The ceremony was personally gratifying and deep with a sense that something great occured. To experience a similar meditation feeling, click here and meditate on.

The next moment, people start circumbating the flagpole again, this time to assure themselves the job is well done, and that all is well.  I joined them in doing this, in some kind of almost euphoria.  Some hours later the place is empty again, except for the tents further away belonging to the people that will spend the night here, maybe to return the next day, or  to do the Kailash kora.  I asked our Tibetan driver if the flagpole was in a good position and he answered me ‘everything is OK, this is good for Tibet’.

The Saga Dawa festival has been held here for the last thousand years… Having been part just once is such a powerfull experience, I’ll never forget these moments of magic.