The big hiking day ! Today we had to cross the highest point on the kora, Drölma-la, about 5600 metres.  I woke up and the cold I had been developing the last couple of days, was now really annoying me.  I had not slept well and had to cough a lot.  Not a good start and with every hundred metres I went up, it took away more of my energy.  By the time I reached the Drölma-la, as the air became very thin, I was completely exhausted and had to rest every two steps to catch my breath.  I could see the player flags on top of the pass but I simply was out of energy and sat down for a while to eat a little.  It was great to reach the top… but I felt miserable.  I decided not to stay here any longer and after I sent my paper windhorses to the heavens, I went down.  I quickly felt better, and by the time I passed the Gori Kund frozen lake, I rested to have a short lunch.  I had to stop for a herd of yaks anyway and while I was sitting there, I enjoyed – with great admiration once again -  the singing of the Tibetan pilgrims who came down too, their voices having a wide reach. On the way further down, after having crossed a snow covered field, it was a matter of  finding your own way down between the boulders, untill we finally reached a river, on the East side of Kailash.  The last three hours of our 10 hours hiking day were like endless… After every bend, I expected to see the Zutul-puk monastery, the place we were staying for the night, but everytime there were only more rocks.  I kept on singing my favorite songs in my head (and sometimes uploud), just to try to forget my cold, my exhausted body and sore feet.  The monastery was finally there and it was such a good sight ! Even with the dogs we had to throw stones to, didn’t spoil our happiness… 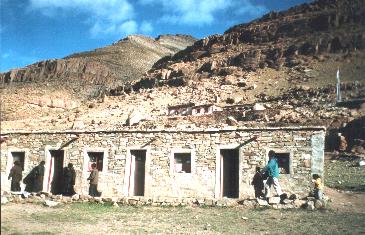 Zutul-puk was even more basic with very odd-looking beds (piles of stones with wooden berds on top of it) , and we had a visitor that night in the form of a foor legged gray species with a long tail (which we never found back and since we were tired didn’t care about too much).  There was a kitchen however and the people there (especially the kids) were just wonderful ! 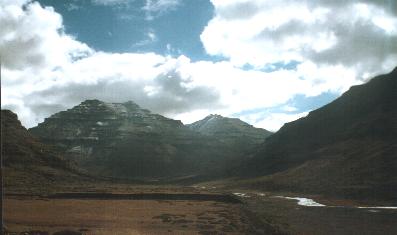 The next morning, after another night of little sleep, I went for a visit to the monastery, to see Milarepa’s cave.   The monastery was deserted (there are only four monks in the monastery over there).  I encountered one of them, who obviously knew I was looking for the cave, and he showed me the way.  The cave is a small and low one, and the tale is told that Milarepa pushed the ceiling higher with his hands – his palms are still visible in the rock.  Once we were on our way for the last leg of our kora, we encountered the footprints and ellbow prints of Milarepa and a lot of piles of mani stones,  also some prostrating female pilgrims, which I gave some money, out of awe – it appeared just so unreal.  The third day was only some four hours of hiking, with beautiful sights of the mountains and a great canyon.  At the end, we were glad to be without sin and shared our remaining food and snacks with our porters who had carried all our stuff for the last three days.  And we were off for the holy lake of Manasarovar, to relax and take a bath in hot spring water -  it was the best bath ever !