So should we stay away from Tibet ?  I think we shouldn’t.  During your travel through Tibet you have the opportunity to support local people, just by staying in their guesthouse, buying food and souvenirs from them, sometimes just by giving them something (beware however not to encourage  begging – especially in places where a lot of ‘professional’ beggers are around).  Moreover by visiting their country, showing your interest for their culture and problems, you support them mentally, which gives them more strength to go on in their struggle.   The Dalai Lama himself encourages travel to Tibet – see also some of the links I’ve provided on the bottom of this story. 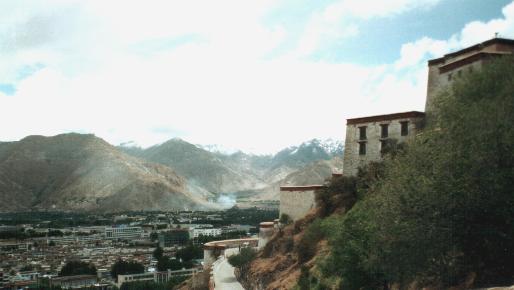 Obviously in Lhasa a lot has changed in the last decennia.  The old Tibetan part of town has become very small.  The traditional Tibetan houses along both sides of the Jokhang square have been replaced by ‘modern’ gray buildings – the square itself has new paving and now looks like as a ‘standard’ Chinese square – the same is valid for the Potala square, where all old buildings have been wiped away, old streets are not there anymore and have been replaced by a brandnew big paved square, making the Potala just a museum surrounded by Chinese concrete-and-tiles-buildings.

When I visited the Ganden monastery, which has been almost completely destroyed during the cultural revolution by the Red Guards, and where reconstruction still goes on at present, I became fully aware of the scale of these destructions.  The rebuilt temples are just splendid, but a lot of ruins remain next to the reconstructed site.  I have seen pictures of Ganden in 1949 and then this place was just twice as big as it is now.  What they also rebuilt is the tomb of Tsongkapa (founder of the Gelugpa Buddhist order).  Tsongkapa’s  preserved body was kept in the gold and silver tomb during about 500 years.  Now only some fragments of skull are in the interior of the new tomb…

And what about the life of the monks ? To start with, there are far less monks than 50 years ago.  Also some reports state that among the ‘real’ monks, there are Chinese ‘undercover’ monks – of course these reports are hard to verify, but likely to be the truth – so the freedom of speech is very limited even inside the monastery building !  But again the monks I met here seemed still to live in a way like they always have done.  I was lucky to see the praying of some hundred monks in the assembly hall, followed by them having lunch… The Buddha is still worshipped by many pilgrims and here too the butter lamps are continuously refilled by them.  From inside the main assembly hall you can reach the Throne room, where the yellow hat of the current Dalai Lama is at display, the one he forgot when he stayed here.  There is even a building here that has never been entered by anyone since his last visit, kept in the same state as he left it, and waiting for his return.  The true Tibetan spirit is surely not destroyed, no matter what has happened and no matter the present efforts of the Chinese to try to do so.

This entry was posted in Hiking and tagged Tibet. Bookmark the permalink.