That day we first visited the Hollywood area.  When driving from El Segundo towards Hollywood, we made some sightseeing trip through Beverly Hills.  We didn’t meet any of the stars or other famous people, we only saw beautiful cars in the streets and encountered police and security officers, always telling us not to park when we were slowing down.  The houses were all fenced and had gardens surrounding them.  After a while we arrived in the Hollywood boulevard.  I had seen this boulevard numerous times on TV, and finally I was standing there and walked on the so famous pavement.   Next, to the Chinese theatre, to admire the foot-and-other-prints of the famous.  It was like all the TV series coming true all at once, but this was real, and at the same time this seemed just like an ‘ordinary boulevard’ … a bit of a strange feeling came over me.  A feeling that would come back many times during my trip through the USA.

Next, we were driving into the hills of hollywood, stopped several times to see some houses of filmstars (even climbed a fence once), fotographed the Hollywood sign,… to arrive finally on the parking lot of Universal Studios, where the view of LA was great : finally high-rise buildings in all their glory !

Half a day visit to Universal Studios… was like all the movies coming true.  After having met Jaws & Frankenstein, after having been in an earthquake and in a fire and almost in space, it was time to return to reality.

We went on for the following days drving on the Pacific Highway, passing in Santa Monica & Santa Barbara (made a little “Bay watch” beach stop) and went on towards Big Sur, with wonderfull vistas all the way.  It was also the first time I had seen the Pacific ocean, and of course I couldn’t resist at some point to hike down from the road and feel if the water was any different than anywhere else in the world. 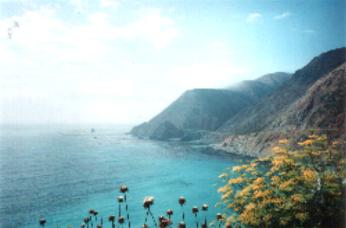 This entry was posted in Hiking and tagged USA. Bookmark the permalink.