Chased by an elephant

At first, it started rather disappointing.  After a couple of hours driving in the Kruger park, after the ‘thrill’ of seeing your first zebra or impala in the wild, you start thinking ‘where has all the wildlife gone, where are the elephants, the rhinos, the lions,… – did I travel this far to see some zebra and a couple of birds ? ‘  But then suddenly it happens, the show begins, … suddenly an elephant or a rhino crosses the road, right in front of your car, ignoring all about you, just as if you’re not there – you’re not allowed to drive faster than 40 km/h in the park, so you’re supposed not to bump into something.  Seeing these big animals in their ‘daily life activities’, in their natural habitat, it’s really impressive.  Sometime later we ‘bumped’ into a family of elephants, feeding on the leaves of the trees. The whole family including the little ones.  The sound of the elephants, the trees that crack as they pull against them.  It’s something unforgettable.

Another 4WD passes by and tells us they have seen lions further down the road.  Let’s go ! Arriving there, what we saw was really impressive.  Eleven lions sleeping together, just besides the road. A real intimate athmosphere. We could touch them if we wanted to - but beware :  these are real wild animals !Every year people get killed in Africa because they get out of their vehicles ‘for the picture of a lifetime’.  Soon after we arrived, some of the lions started to wake up, but none of them were aggressive to us; just like the rhinos and elephants we had encountered before, they just seemed to ignore us completely.

So did the couple of elephants we met later on. 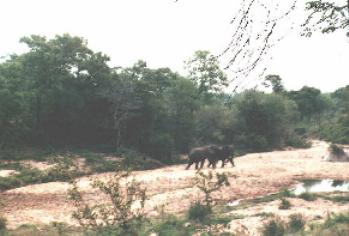 From a distance they seemed to be fighting with each other, but as we approached we quickly saw these two had something completely different in mind.  Love was in the air, so we approached even more to watch the spectacle.  After half an hour of approaching each other, it seemed the male was too small (young ?) for her, so he seemingly went away… She stood there without moving, flapping her big ears heavily, as he went away and started feeding.  Was she still waiting, was his leave just a part of the ritual, could he come back ?  What has happened next , I’ll never now, as we had to move further…

Again, what surprised me was that these two also ignored the presence of humans-in-their-vehicles completely – as if we were invisible intruders.  It really felt like an intrusion into the life of these animals at that time.  However…  a couple of hours later, after we had seen almost nothing since this last meeting with the ‘love birds’, except for the odd eagle and a turtle, we encountered an elephant that was not ignoring us… 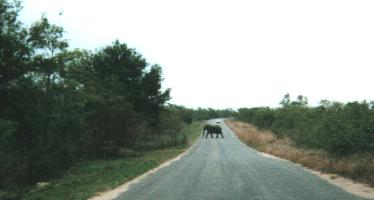 We just came driving by, and from a distance, we could see an elephant next to the road.  Big deal … we had seen elephants before… we did not intend to stop to take pictures.  Suddenly our guide stopped and put the vehicle in reverse.  She had seen a snake on the road, and that was something to stop for !  The snake appeared to be hit by a car and as dead as a dead snake can be.  So we moved on again, approaching the elephant again.
The next moment, as we came next to this massive animal, it started to chase us !  Our driver didn’t notice this at first, so we shouted : “Full throttle ! Elephant behind us”.  The elephant was accelerating fast and approaching our vehicle dangerously close.  If he would hit the car, we would flip over ! Luckily enough our acceleration in first gear was good enough to escape from this aproaching danger and the elephant stopped following us – thank you Volkswagen.

Who said safari was boring again ?

This entry was posted in Hiking and tagged South Africa. Bookmark the permalink.