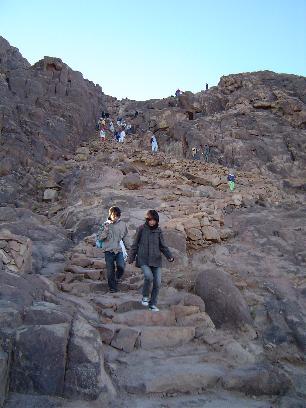 Our trip started at the hotel at 23:30, I had taken a short nap before I went to diner, so we went shortly after diner, already in complete darkness, on the road with the small bus that would bring us to the base of the mountain.  The temperature was a pleasant 27 degrees Celsius.  When we arrived at the parking lot near the Saint-Catherine monastery, we started walking the ‘camel route’, which is the easiest way to get on top of the mountain.  There exists also ‘stairs’, some 3000 of them, which is not only the shortest route but obviously the strenous route and at night a little bit dangerous route.  After escaping from the camels – obviously someone taking the camel route wants a camel …? – we arrived after an hour or two at a small tea house nearly on the top, we drank a tea and ate a sandwich, and were ready to go the last part – here you have to take the last part of the stairs route, which took another half hour.  We were the first persons on the top this night, so we had a good spot to sit behind a rock, protected from the wind, and I started to get dressed for the night, which means get out the gloves, woolen hat and down jacket out of my bag… The temperature : near to zero degrees Celsius.  It was a clear night, and it was so quiet up here – till the masses arrived… it was getting soon too crowdy to stand and more and more people were hiring blankets from the bedouins, some people were only dressed in T-shirts , shorts and slippers…
Sunrise 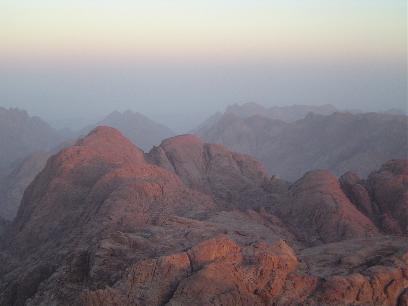 The wait till sunset was still a couple of hours, but the spectacle during the last half hour when the sun slowly came from behind the mountains was spectacular.  After the last stars were gone, the mountain silhouets were becoming visible, but only faintly – it took still quite some time till the sun was appearing, first as a tiny dot , then in all its grandeur and brightness.  The mountains were coloured in red all over now and only at this moment one could see how fantastic this point was we were standing…  Most people hurried down immediately, I stayed a while to enjoy the feeling, and to go to the worst bathroom of my life on top of Mt. Sinai (highly not recommended). 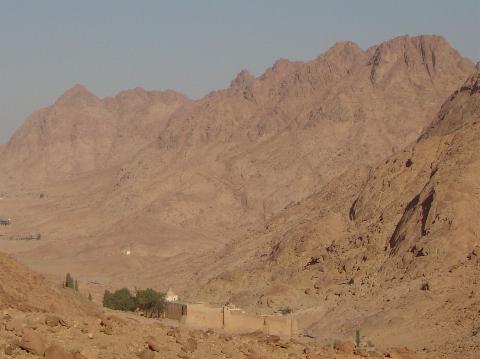 The road down was easy and no problem at all for me with the hiking boots, the ‘hikers with the slippers’ had more problems.  And it is getting hot very soon ! When we arrived at the parking lot again, we waited to be allowed inside the Saint-Catherine monastery, which is an orthodox monastery and has a nice collection of old icons – too bad the monks don’t allow you to look carefully and the lighting is really bad inside.  Also inside is the burning bushes that Mozes encountered.
A great way to end the climb of a holy mountain.
By the way, after you have visited the monastery, there are some cafés around, so relax, have a drink and wait till your bus arrives.  Another refreshing experience.

This entry was posted in Hiking, iconic mountains and tagged 1500+, Egypt. Bookmark the permalink.